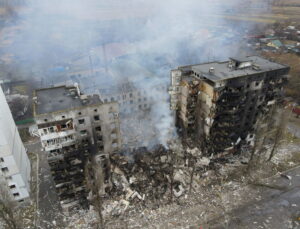 This is the first article on my website that I decided to write in English. I think it’s important to share this sort of information with a lot of people. I am a Ukrainian refugee, but I am also a psychotherapist. So the information here is not just theory, but my own experience.

This article concerns not only Ukrainians. It is for everyone everyone who somehow is emotionally experiencing or is involved to the situation in Ukraine now.

I’d like to speak about the psychological problems of the society, about how war is perceived and lived through and what is happening to all of us. This video is purely psychological, researching and supportive. But I suppose that also hatred may take place here, because it needs so much to have an outlet now.

I think the most important things were described and told about many times. I’m talking about

Human nature is imperfect, and it turns out that no one is interested in these topics until the global questions of existence are asked directly to a person.

War raises deep issues of human existence and give them an ordinary meaning. It makes people face these questions and experience them without any chance to avoid.

War as a boundary situation knocks the bottom out. It rocks or even destroys all the psychological adaptations of the individual. War also causes a number of strong existential emotional experiences as powerlessness, anxiety, embarrassment, loneliness, fear of death, meaninglessness.

Powerlessness. The first feeling that arises, constantly present in life background and becomes chronic in the border situation of war is powerlessness. It is powerlessness to affect anything, to stop, to turn back. Powerlessness is the most difficult feeling to experience. Even in times of peace it takes me and my clients many hours of therapy to let this experience come to us, to recognize and realize it. What can we say now, when the accustomed world and our habitual internal and external supports are collapsing? I think that what we can make with powerlessness is to do what the famous proverb says: change what you can change and accept what you can’t. In any case, there are things still within our control (like eating, feeding the cat, helping whoever is around) and that is what we can lean on now. It is important not to let powerlessness become toxic and all-consuming. We have to leave behind at least some ability to influence the reality around us.

One of the most striking consequences of powerlessness is the feeling of hatred. The psyche in a borderline situation is sharply polarized: good and evil, good and bad, right and wrong. The feeling of hatred is the perfect fuel for war and victory, so it is boosted in every way possible by mass propaganda. But while for the soldier it is a mean to achieve his goal, the experience of hatred on the home front has more toxic effects on the psyche. If one fails to make use of hatred for good, helping or working in the rare, then this hatred will seek its outlet and extend to those whom it can reach, wound, sting, push away, beat or take their life. This is how friendlist cleans-ups in Facebook, quarrels with close friends who expressed a different opinion, or threats of massacres against children of other nationalities systematically take place. Radicalism simplifies thinking and helps us adapt to a complicated reality. But behind the rabid hatred always lies powerlessness and pain.

I attended a free lecture held by the famous psychotherapist Alfried Lengle, a student of Viktor Frankl. I was looking forward to the opportunity to listen to a well-known and very experienced existentialist in such troubled times. But the lecture was practically disrupted by part of audience. They rudely wedged in Alfried’s speach, interrupting him and expressing their indignation. They splashed out their hatred at everyone who went beyond their rigid overview and talked about more complicated existential things. They expressed their rage about what can support and what is important to get in touch with now. Alfried Lengle spoke about the process of differentiation: about the possibility of view processes more complex and many-sided, letting in and experiencing complicated feelings. Those people were not ready for his information. The opportunity to get in touch with those processes, that Professor Lengle was talking about, become possible only after one overcomes and experiences the hatred and is able to see the world broad and many-sided.

Fear of death. The theme of death is the most difficult subject for the therapist and the client both to talk about and to be endure. Our psyche has an interesting phenomenon: we can substitute the fear of death for other fears, but in the root of it all we can always find the existential fear of the end of being. No need to emphasize that in wartimes the fear of death finds its legal life in the consciousness. Those who could not face the death, ignore it or turn away from it in peacetime, have now clearly looked it straight in the eye. I think that powerlessness and fear of death are two global experiences that trigger all other existential processes.

Anxiety of the unknown. We are a generation that grew up in peaceful time. We heard about the great war only from our grandparents. The war has become something black and white on the screen, and a bit romantic for us. It is filled with beautiful stories of heroism, love and victory. But our grandfathers told their war stories bitterly and without much enthusiasm. Presently we have been slowly facing the instability of this world, our basic need for safety has been disrupted. The world has been rocking and losing stability, and I’m not just talking about the war in Ukraine. No one knows what the future will be like, what will happen tomorrow, or which of the big political players will enter the fray. And at the same time it seems that the opportunity to feel relation with the future is lost. One cannot be sure of anything. It is hardly possible to set even short-term goals and go towards them. It is as if a person is frozen in this vagueness. And it has to be endured it day after day.

By the way, I have always been critical to people who criticized our grandfathers for their so-called “Soviet” upbringing, because I understand that people who survived hunger and war could not be different. They were just like the time they lived in. Being defines consciousness.

Frankl: Every time has its own therapy.

And now, from my own experience, I could perfectly understand my grandfather who stocks up soap, flour and cereal.  I was staying in the bomb-shelter, standing in huge queues in the stores for only one week. I saw ruined roads and realized that there was no evacuation from my town. After that I acquired an interesting habit. I now eat like it is the last meal in my life. I feel the instinct fear that I may have not get a chance to eat anytime soon. And I feel need to stock up as well. The future is vague and unknown.

Existential loneliness. When I was sitting in the shelter I saw mutual support and extraordinary unity between people. People were united in common distress and helped in any way they could. But I also observed another picture. Almost every day someone went aside to his corner and cried quietly on one’s own. On about fifth day, it was my turn to sit quietly in my corner crying. And at that moment, when I was crying, I didn’t want anyone’s help or support. I understood that no one could help. That was my own existential encounter with war, fear, the collapse of my usual world. And it was an encounter that each of us had to endure. In about a month, I attended a lecture by Alfried Lengle who told about the importance of going through one’s own existential loneliness.

Meaninglessness. The loss of meaning now is global for people who used to rely on the material world. It is very hard time of saying goodbye to it. You earn a lot of money for your own home, spend years making repairs in your house or some way arranging your life, and at a certain moment you have to say goodbye to it: to say goodbye to your comfortable home. And you have no idea if you will be able to live in it again or it will be ruined with bombs. But this certainly also applies to those around the world who are about to face inflation, layoffs, rising food prices, hunger, and so on. At this point one faces the uselessness of one’s efforts to control what seemed always to be in one’s power. The reliance of the material world is now very changeable. It demands reassessment of one’s values, where other areas of life must be given meaning to. The experience of meaninglessness can be replaced by sadness and grief, by loss. But values still must be reassessed. When I packed my backpack, I took several meanings with me. One of them is my channel. I think what we can take the most important for us. We can take something giving meaning to our further survival to our hands and put it into a small backpack.

I think it’s important to look for some intangible supports in the search for meaning. If materiality and corporeality give us a general sense of security, which is certainly important, then meaning gives us the spiritual safety that will help us to survive in the most difficult circumstances. Frankl identified three main ways of realizing meaning in life: by making a difference to the world, by having particular experiences, and by adopting particular attitudes.  For myself, I noted how people now refer to these ways: the values of experience are manifested in war love affair or in a sense of humor, the values of creation can be expressed in volunteer work or giving in donations to victims. The values of attitude can be realized in the basement, when you face your powerlessness and inability to do anything.

So I can give my own example of attitude values: I decided for myself that I live in very interesting time, which I can then implement in reflection and in the creation of my articles and videos, this will help me to explore another big part of reality and become more useful to people.

The world is wobbly

It is important to find our points of support and endurance, points of balance. Like a surfer on a wave. If he goes against the wave, it will just sweep him away, he needs to be supple to hold on. There are many sweeping waves around us now. Waves of hatred sweep ones into the archaic realms of the psyche, making people become borderline organized. Waves of insane optimism sweep other ones into the world of illusion. Waves of hopelessness may sweep ones into deep depression. I feel these waves clinging to me and striving to carry me away from time to time. But there is a great way to manage these absorbing energies, and it was described by Frankl.

The first to break were those who believed it would soon be over.

Followed by those who didn’t believe it would ever end.

Surviving were those who focused on their actions, without expectation of what may or may not happen.

All we can do now is continue to live our lives based on the given conditions of life’s task, accepting the fact that it is not in our power to change them.

Thank you for your attention. Hate the war!

Psychology of the War. How We can Survive than World is Wobbly